Figured I’d put these in one place since it can sometimes be difficult to find things if there’s lots of recent posts. Gets pretty long that way but it’s easier to find.

First up is Mango Languages. I don’t have a product that I made with this service because it doesn’t really produce visible products.

First and foremost, Mango Languages is free, but it’s not an online tool in the sense that I thought it was. I’m really used to DuoLingo and YoyoChinese and ChineseSkill being totally isolated digital tools, but Mango Languages surprisingly directed me to my local library’s website. Instead of being offered exclusively through the Mango website, it took me to the FNSB public library site’s home page with no indication of how to even find what I was looking for! Unable to find anything relating to  this service on the library site, I found out that Mango Languages has a mobile app so I’ll be reviewing that, but I think Mango is losing out here on “ease of availability.” Consider that a major barrier to entry – even the mobile app seems to want you to go through your local library. If your local library doesn’t have a subscription, you’re boned. What an archaic business model.

I worked through some of Mango’s Mandarin Chinese lessons since that’s what I’m most familiar with. Languages are divided up into really broad “topics” – here it’s Conversation, Chinese Zodiac, and Feng Shui, which is weird, but I went through all of Feng Shui. I also looked through the start of Conversational Chinese and followed it for a while just to make sure I was giving the app a fair and thorough testing of a single language.

The verdict: if you’re new to a language, this probably isn’t the app for you. I think at higher levels in education it would be a good tool for intermediate or advanced learners. Nowhere that I could find does the app go over the importance of tones – it’s mentioned, but not taught. If you can’t distinguish the basic tones in Mandarin you’ll never have a conversation, no matter how good your vocab is. There’s also nothing about grammar and syntax. There are little “grammar notes” here and there which are useless without an understanding of how a language is ordered.  The app is all about mimicking sentences and breaking them down word by word without any explanation as to what the order means, why it’s in that order, or why similar words mean different things in Chinese. If you don’t know, similar words in Chinese may sound exactly the same to an outside speaker, but with different tones in the vowels, so if you can’t distinguish between the four tones you can have some embarrassing or funny slip ups (è‰æ³¥é©¬ is everybody’s favorite but there are a LOT of weird ones). Every decent language learning tool I’ve ever seen has started its Mandarin or Cantonese lessons with an overview of the tones and how context determines meaning more than literal word choices, and this does not. Chinese is all contextual so these things are important.The pinyin writing system, which the app uses, indicates tones, but the app never describes what pinyin is or what the marks above the vowels mean.  If the grammar is this lacking here, in a language with similar syntax order as English (SVO), then I imagine it’s really a pain for other languages with major order differences (Romance languages).

That said, there’s an option to record yourself saying a word, which is actually really awesome, and you can listen to it and play it at the same time as a recording of a (native?) speaker saying the same word so you can compare your pronunciation. That doesn’t do much if you don’t understand the tones, but it’s still really cool. I wish all languages apps gave you recording tools. It’s still just asking you to parrot sentences, but it’s the most effective way to parrot sentences, I guess. The layout of the app is actually quite nice, even if it’s kind of unresponsive. It’s simple and sparse but that’s what you want in a language app – the ability to navigate unhindered.

I think I will probably keep the app on my phone. You have to download lessons and they are pretty big, but I imagine since I already have an understanding of the building blocks of  Mandarin, this app will be good to pick up on a lot of little things I might miss otherwise. Mostly it looks like small talk. Were I teaching a language I would recommend this to students who had already been studying for, say, at least a year in school. It’d be useful for picking up and mimicking new sentences, but not for learning a language from scratch. It’d be useless for that – in a tonal language where context matters, or a Romance language where conjugation matters, you might do more damage than good.

Next up is Quick Rubric. Making Rubrics can sometimes be a real pain because tables in Microsoft Word / Pages / Google Docs aren’t always easy to work with.

I really like this. It offers up an incredibly easy to use interface. I used it to recreate a rubric I’ve taught with in the past and managed to get the entire rubric made very quickly, not counting typing type. The interface is incredibly simple and lets you create rubrics in sort of a drag and drop / add your own template. There’s not really much to say because the website is very easy to use and very attractive. It works well on mobile, also. I was using and Android and was able to login and make a rubric just as easy as on a computer, typing obviously notwithstanding. I always think of rubrics as being one of the biggest pains in the butt in the world of practical education. Re sizing tables in MS Word and trying to make sure everything fits without a table breaking weirdly is infuriating, but this tool really fixes all of that. Be able to scale the score how you like is awesome too. Sometimes rubrics are weird when you have a scale (out of 30 here) but REALLY it’s worth 100 points in the gradebook. This scales automatically for you, you just click it up or down.

There’s no way to swap the x and y axes though, which is weird, because in larger rubrics like the Six Traits one I made, it’s sometimes easier to have the rubric horizontal with the scores going from top to bottom instead of from left to right. Having it start at the highest score instead of the lowest is a little weird too, but not disorienting. There are also no text editing options, which I would like. No way to bold or italicize or use bullets, as far as I can tell.

You can see my rubric here: 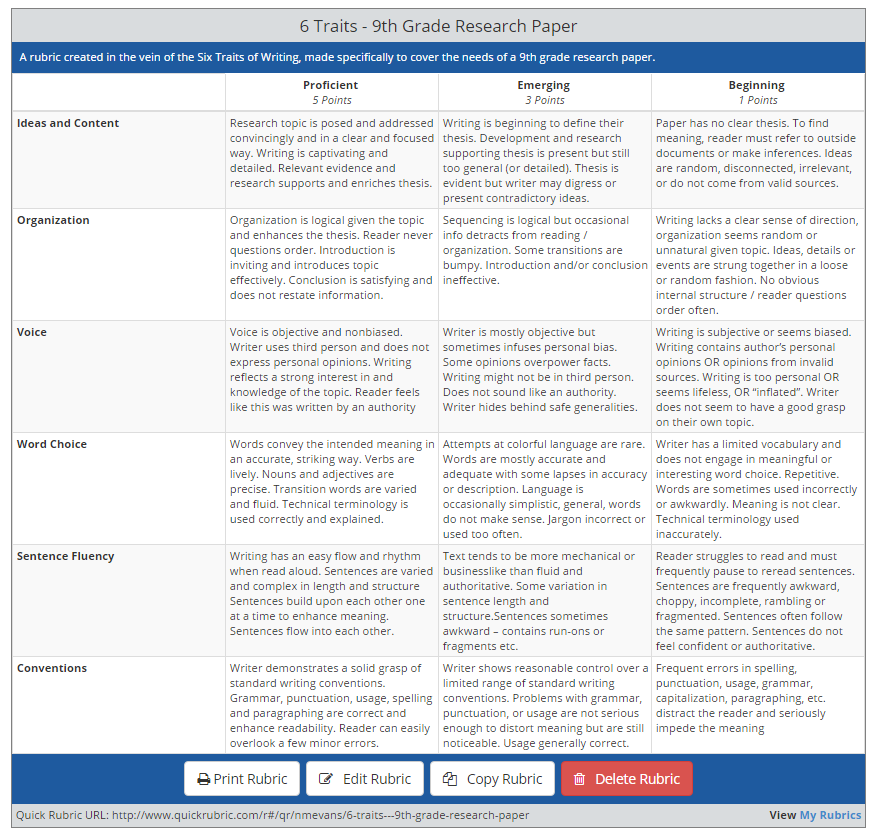 It comes out easy to read / formatted nicely and can be shared with just a URL. Far as I can tell you don’t need an account to view other people’s rubrics so there’s some cool potential there for being able to swap advanced rubrics back and forth with other teachers. That’s always nice. Much as I love Google Drive, it’s not always as fast and easy and flawless as it needs to be.

The biggest drawback is with the printing. I don’t own a printer but I did try to print it to see what it looks like, and there’s a huge logo at the top of the screen. Because it’s in portrait orientation instead of landscape, it doesn’t all fit on one page. The URL being listed is distracting and gives your username away to your students, if you care about that. I suppose you could clip it and print it as picture if you want but that sort of defeats the point. It’d be nice if there was a “export to PDF” option.

Despite its shortcomings, the tool is simple and plain enough that I’d use it in the future. That’s what I really want out of a rubric creator. No fancy flash based programs, no weird breakable tables, no obtuse formatting issues, no pre-made garbage rubrics, just a simple tool that takes my text and arranges it in a functional rubric with a point scale. That’s all it needs to be and that’s what it is.

Last up is Screencast-O-Matic.

I figure I’ll let this one mostly speak for itself. The video is part of the review.

Sorry for the audio quality. It turns out Screencast-O-Matic doesn’t work with on-board microphones in laptops. BIG strike against it, I think. I had to re-record over the video’s audio using my phone as an external microphone. That’s not a glitch, either. I replicated this error on my old Macbook as well. How weird, right? I also made three screencasts (1, 2, 3) just LAST WEEK using Camtasia and Camtasia recorded that audio (which, as you can tell, is high quality) using my Windows laptop’s on-board microphone. Most people nowadays do the overwhelming majority of their work on laptops or tablets and have no need to own desktop computers. Most people I know who do are either tech junkies / work with computers or are gamers. Certainly most teachers don’t seem to need them. How strange.

Something I didn’t mention in the video is the online features. It is very easy to navigate your saved videos and if you pay the $15 a year you get more storage space plus a bunch of other cool but probably mostly useless features. Having it stored online is great, but I’m not sure why you’d bother when they’re just going to end up on YouTube anyway? I also didn’t think about how launching the screen recording tool from the website might make it useless if you ever want to record without internet! Mostly I would never do that, but it’s something to think of.

Screencasting in general is one of the greatest educational tools we have, I think. I love screencasts and have used them in my classroom before. I’m currently being paid to make some for the UAF library. Google Drive, your gradebook, checking grades, navigating district websites, how to use class tools, etc. – there are a lot of options for screencasts.

This tool is just as good as any other, really. There are some weird quirks that I go over in the video but for the most part I think any teacher could find cool ways to use this. It does have a few drawbacks – the weird web-based thing, the lack of editing, and the audio issue I ran into, but it’s also fast and easy and has that cool pointer feature which Camtasia doesn’t have. All in all it’s a good tool for teachers to try out and it requires a FAR lower level of tech literacy than Camtasia does, for example. If you’re thinking about ever doing screencasts (and you should), I would say start here. For most teachers, Screencast-O-Matic delivers the tools you’ll need for your classroom (record and export easily) in a simple package. It doesn’t do much else (like Camtasia) and it doesn’t ruin its functionality with stupid design (like Jing) so, if I didn’t already have a Camtasia license, I’d probably use this for most of my screen recordings for my classrooms.

In short, Camtasia > Screencast-O-Matic > Jing, but this is free. You choose.

4 thoughts on “Tool Reviews (All Three)”